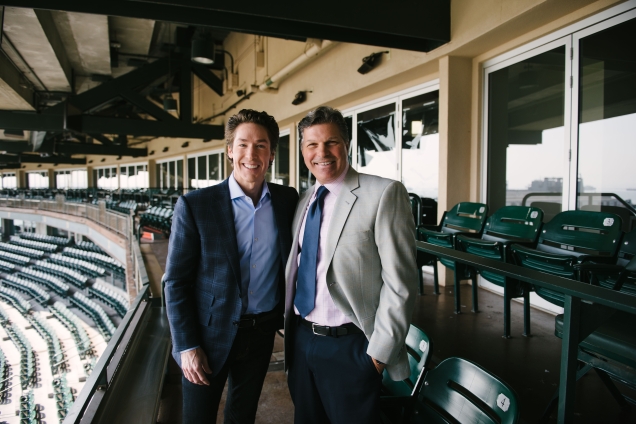 On Sundays pastor Joel Osteen does something that would give most people a severe case of anxiety. He speaks to 40,000 people who attend services at Lakewood Church in Houston and to millions of others viewing on television in more than 100 countries.

Osteen is the rare individual who sells out stadiums, and he does so without The Rolling Stones or Taylor Swift sharing the stage.

Most observers might assume Osteen was always comfortable with public-speaking. The truth is quite the opposite. In fact, Osteen spent 17 years behind the scenes, working the camera for his father, the late preacher John Osteen. Joel did not see himself as a speaker, he did not feel as though he had the gift to captivate audiences, and he was very nervous about taking the stage. Osteen once told me he got nervous simply reading the church announcements!

“Carmine, when I began preaching I was nervous and intimidated. I’m naturally quiet and reserved. I was bombarded by negative thoughts,” he said.

Osteen made the transformation from shy cameraman to electrifying speaker when he reframed his internal narrative. Osteen admits that his negative self-talk got the better of him. He would repeat these phrases to himself:

You can’t do this, Joel.

You don’t have the experience.

Nobody is going to come.

It took Osteen at least a year to build up his confidence. How? Joel Osteen hit the ‘delete button’ on negative self-talk, replacing words of defeat with words of victory.

“If I had let those negative thoughts play over and over in my mind, they would have contaminated my confidence, contaminated my self-esteem, and contaminated by future,” Osteen writes in his new bestselling book, Think Better Live Better.

Nearly every inspiring leader I’ve met has dealt with periods of doubt. They’ve faced doubt about their leadership qualifications, doubt about their public-speaking ability, doubt about their ability to make an impact. Osteen did the right thing. He reframed his internal narrative, changing the dialogue in his head. Words are like seeds, says Osteen. Whatever you say will take root. Make sure the roots you’re planting are strong, empowering, and inspiring.

Joel Osteen is one of the leaders Carmine Gallo features in his new bestselling book, The Storyteller’s Secret: From TED Speakers To Business Legends Why Some Ideas Catch On And Others Don’t (St. Martin’s Press, 2016).

One thought on “Joel Osteen’s Secret To Public Speaking”