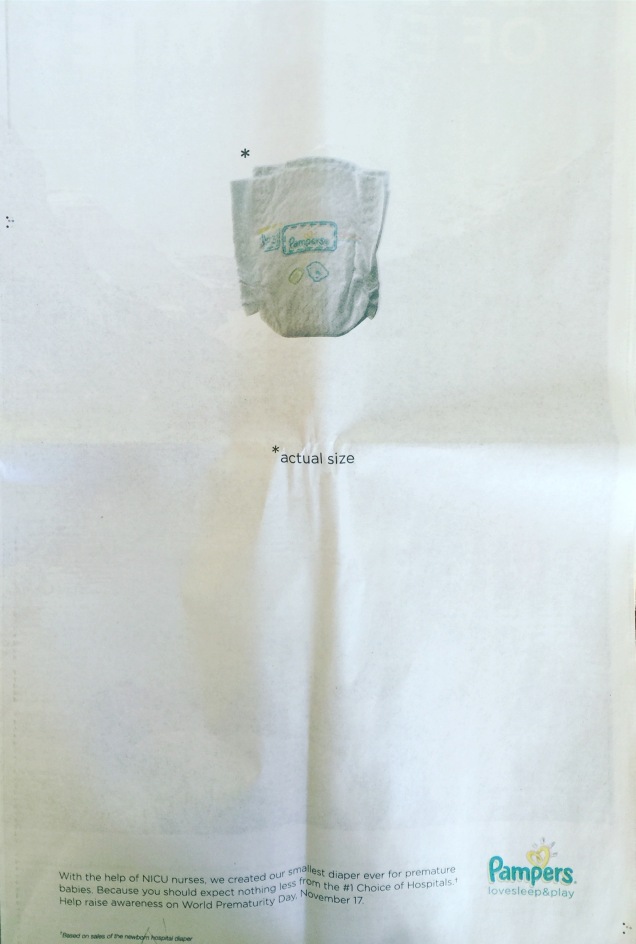 Congratulations to Pampers for designing an eye catching ad for a good cause, World Prematurity Day. The ad ran in major newspapers across the U.S. It was effective for several reasons:

2). There is very little text. A short paragraph at the bottom explains why the diaper was created and why the ad is running on November 17th, World Prematurity Day.

3). By positioning the page in newspapers like the New York Times which are heavy in text, the ad stands out even more.

Less clutter draws more attention to your product or idea.

Professional designers are not afraid of white space. In fact, they embrace it and use it creatively to catch your attention. Business professionals might want to take a lesson from the Pampers ad the next time they create a PowerPoint, write an email, or suggest design ideas. Reduce the ‘noise’ and grab more attention.

Carmine Gallo is a popular keynote speaker and communication advisor. His new book, The Storyteller’s Secret, explains why some ideas catch on and others don’t (St. Martin’s Press).

It was a pleasure to swap stories and leadership philosophies with former 49ers quarterback and hall-of-famer Steve Young. I hope he enjoys “The Storyteller’s Secret” as much I loved his new autobiography, QB: My Life Behind The Spiral.

In this video interview for Forbes.com, we talk about overcoming adversity, how leaders take responsibility for their actions, earning your pay, and how Young went from eighth string quarterback at BYU to the highest paid athlete in professional sports.

When Young was playing eighth string, he didn’t suit up for games. He was lucky to get a ticket to sit in the stands. He called his dad and said, “I’m done. I’m quitting. I’m coming home.”

“You can certainly quit,” Steve Young’s dad said. “But you can’t come home. I’m not living with a quitter.”

Young stayed at BYU and and kept pushing day after day after day. He was the first to show up for practice and the last to leave. He threw 10,000 practice spirals in the off-season. He was determined to outwork everyone else.

“The difference between average and great is in the work ethic,” Steve Young told me. “If you want to be good at something, it takes practice, practice, and more practice.”

When Young got his chance he was ready. He set records at BYU and is enshrined in the College Football of Fame. He went on to sign a $40 million contract with an expansion league before heading to the 49ers where he would lead them to two Super Bowl victories and claim his place in the Pro Football Hall-of-Fame.

Young says character and conviction are everything. He believes in living a positive example both on the field and in private. Today he runs a private equity firm in Palo Alto, California, where my wife and I see him from time to time attending his daughters’ gymnastics events. Whenever I see him I think to myself, “He played the game when character mattered.”

Carmine Gallo is a popular keynote speaker and internationally bestselling author of eight books including “Talk Like TED” and “The Storyteller’s Secret: Why Some Ideas Catch On And Others Don’t.”