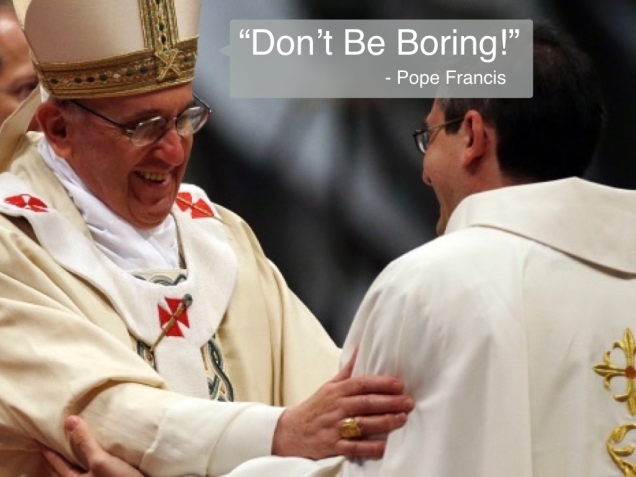 In The Storyteller’s Secret I devote an entire chapter to one of the great spiritual leaders of the world, Pope Francis, who turns 80 today. Francis learned his communication skills as a Jesuit seminarian and continues to deliver speeches that rely on the building blocks of narrative to capture attention: metaphor.

Whether he’s comparing greed to “the dung of the devil” or the church as a “field hospital” that must go into the streets to find the spiritually “wounded,” Francis’ speeches are loaded with vivid imagery to make the abstract tangible.

In some speeches Francis will use more than one metaphor in the same sentence:

“For Mother Teresa, mercy was the salt which gave flavor to her work, it was the light which shone in the darkness of the many who no longer had tears to shed for their poverty and suffering.” People who have done evil and know it, live “with a constant itch, with hives that don’t leave them in peace,” he once said. Vanity is “like an osteoporosis of the soul: the bones seem good from the outside, but on the inside they are all ruined.” Some people, argue Francis, are afflicted with “Spiritual Alzheimer’s.”

In April, 2016, Francis released his first major paper on marriage and the family. “Amoris Laetitia” is beautifully written.  Once again, Francis relies on metaphor to communicate the topic. Quoting the psalms, children are “like olive shoots,” full of energy and vitality. Letting them go is like “flying a kite.” When the kite begins to waver, you don’t pull the strings tighter. Instead you give it some slack.

An increasing body of evidence is emerging in the neuroscience literature to support the power of storytelling; specifically, the effectiveness of using analogies to bring abstract concepts to life. Stories work because they activate many parts of our brain. Metaphor and analogies are critical devices to make it happen. Pope Francis is a master of the technique and his speeches are well worth studying.

Carmine Gallo is a popular keynote speaker, best-selling author, and communication advisor for the world’s most admired brands